$33.2 Million Comprehensive Bicycle and Pedestrian Plan Heads to the Full Board for Approval

On April 20th, the Community Development, and Transportation committees of the St. Croix County Board held a joint special meeting to review, discuss, and vote on a resolution to approve the County’s Comprehensive Bicycle and Pedestrian plan.

The plan, which has has been in progress since August of 2015, was developed to serve as a guide for the further development of bicycle and pedestrian facilities in St. Croix County.  According to the background memo relating to the proposed resolution, the plan’s intent is to give local units of government, maintenance authorities, and the county as a whole a comprehensive map of potential bikeways and trails as well as tools and recommendations to consider when planning and setting policy.

The memo also states that over the last two years, a far-reaching stakeholder and public engagement process was employed to gain input from hundreds of people from across the county – including elected officials, agency staff, advocates, and the general public in shaping the future for biking and walking. 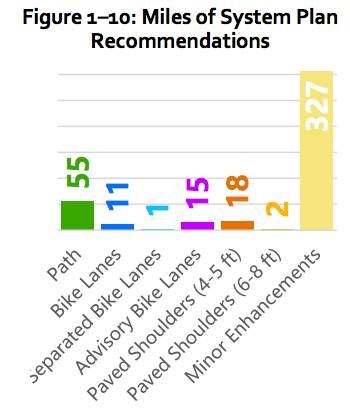 The plan includes 539 miles of trail network across the county that was developed based on stakeholder input and quantitative analysis.  Trail segment types range from shared use of existing roadway to development of dedicated bike paths through scenic areas.

The plan does not cover specifics of how all these projects would be funded.  In the “Funding and Implementation Strategy” section of the plan, it states: “The infrastructure recommendations in the Plan cannot be implemented in a timely manner solely through grant funding. Rather, the majority of the recommendations in the Plan will need to be funded from county and local sources.”  That means taxpayer dollars.

For that kind of investment, taxpayers should expect and demand to see some solid evidence of a return on that investment.  The plan includes only one sentence on this topic:  “One study found that every $1 million of spending on off-road paths and paved shoulders generated an annual $9 million worth of economic activity linked to bicycle tourism each year—that is an annual nine-to-one return on the investment.”  That last bit is bolded in the plan document so it isn’t overlooked.  Clearly, the assertion is that by investing the $33.2 Million, the County will receive a $298.8 Million return on that investment.

The supporting reference for this bold statement comes from a case study done by the North Carolina Dept. of Transportation relating to the Northern Outer Banks tourist area.  Apparently, the authors of the plan fully believe that tourism in St. Croix County is on par with that of the North Carolina Outer Banks, and as such can realize similar staggering returns as this plan is implemented.

Economic development is a good thing for St. Croix County, and improving bike and hiking trails in the area is not a bad idea.  As a taxpayer, I would expect that as part of the planning at least SOME due diligence is put in to describe the targeted positive economic impact of the plan, and not rely solely on a single sentence that draws on an extremely atypical and dissimilar case study to assert a completely unrealistic expectation.

The resolution  recommending the adoption of plan was approved for advancing to the full County Board for a vote at an upcoming meeting.

Visit the official web site related to the Plan

Read the 1 page Resolution to Adopt the Plan (PDF)

Full County Board To Vote on $33.2 Million Bicycle and Pedestrian Plan Tuesday