Board Suspends the Rules to Hear From More District 2 Candidates

One of the main agenda items for the October 3rd regular meeting of the St. Croix County Board was to review and vote on appointments made by Board Chairman Roger Larson to fill the District 2 vacancy left by former Supervisor Agnes Ring.

According to the Bylaws of the County Board, when a supervisor cannot, or chooses not to complete their term, the Board Chairman holds the responsibility of identifying and appointing a replacement, who is then confirmed or rejected by the full Board.  If the Chairman puts forward more than one individual for consideration, the Board conducts an election, and the seat is awarded to the candidate with the most votes among sitting Board Members.

Not selected for consideration were candidates  Chris Matter, and Scott Norstrand.  Candidate Kelly Ott subsequently withdrew her name from consideration.

Chris Matter is a long time resident of the Town of St. Joseph, serving on the Town Plan Commission, the Town Park and Recreation Committee, and as a poll worker.  Also passed over for consideration was Scott Norstrand, arguably the most qualified candidate for the position.  Scott is a resident of Somerset, and is General Counsel at SoulTran, Inc. in Minneapolis.  He has years of State government experience,  serving in Deputy Attorney General, Acting Attorney General, and Administration Commissioner roles for the State of Alaska.

At the October Regular Meeting of the Board, candidates Lee and Koester gave brief presentations to the Board prior to holding an election to select the new Supervisor for District 2.  As chairman Larson was directing County Clerk Cindy Campbell to distribute the ballots, Supervisor Roy Sjoberg interjected, raising concerns about the process, and indicating his desire to hear from the other candidates as well.  He motioned to postpone the election until the November Regular meeting, so all candidates could be heard from and voted on.

Supervisor Andy Brinkman raised questions about the current rules, which do not require the Chairman to forward more than one candidate for confirmation by the Board.  Corporate Counsel, Scott Cox, confirmed that under current rules, the Chair has the duty and authority to select and forward at least one candidate for Board approval, and is not required to forward all who apply.

After a significant amount of discussion on Supervisor Sjoberg’s motion to bring forward all 5 candidates, Counsel Cox confirmed that in order to override the authority of the Chairman in this case, the Board would first need to vote to suspend the current rules before considering Sup. Sjoberg’s motion.  Supervisor Sjoberg immediately motioned to suspend the rules, and the motion was seconded by Supervisor Dan Hansen.

Following a strong argument from Sup. Scottie Ard against suspending the rules, the Board voted to suspend the rules in a 13-5 vote. 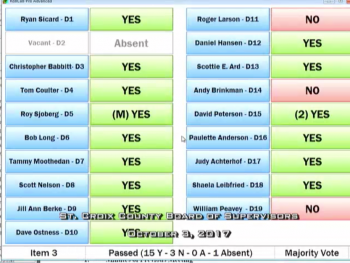 Supervisor Sjoberg’s original motion to bring all candidates forward at the November meeting was then immediately voted on, and passed in a 15-3 vote, with Supervisors Larson, Brinkman, and Peavey dissenting.

All of the remaining candidates have been invited to present at the November 7, 2017 regular meeting of the Board.

View the 6 minute video of the discussion and voting.

District 2 Supervisor Resigns From County Board